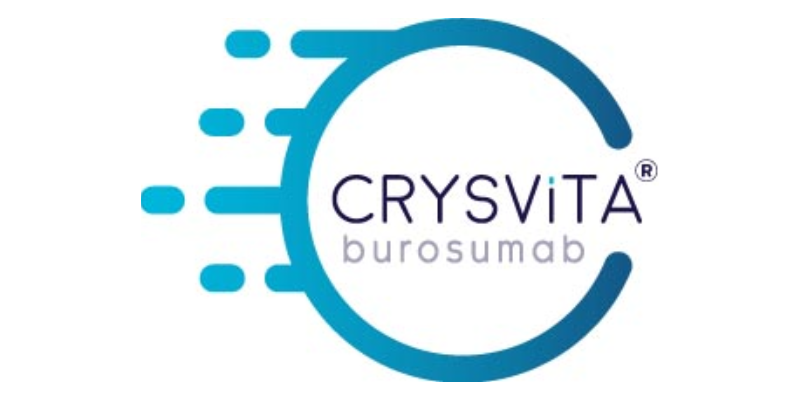 CRYSVITA (burosumab-twza) is a prescription medication used to treat adults and children 6 months of age and older with X-linked hypophosphatemia.

X-linked hypophosphatemia (XLH) is a genetic disorder that causes low levels of phosphorus in the blood and affects bones, muscles, and teeth. XLH causes an excess amount of phosphate to be eliminated by the kidneys in the urine (otherwise known as phosphate wasting or hypophosphatemia). Phosphate is a mineral that is important for the normal formation of bones and teeth.

XLH is typically an inherited disease. “X”- linked means that the disease is due to a defect in the PHEX gene on the X chromosome and can be passed to offspring. In rare cases, the disease is not inherited from a parent and is due to a new defect in the gene. The PHEX gene is involved in phosphate regulation in the body through the fibroblast growth factor 23 (FGF23) protein. XLH causes there to be an increased level of FGF23. Too much FGF23 prevents the body from retaining enough phosphate and results in low phosphorus levels (hypophosphatemia). Over time, hypophosphatemia leads to soft, weak bones that are more likely to fracture. Bones in the hips, legs, and feet are more prone to fracture which can result in pain and difficulty moving.

XLH can also be referred to as other names including hereditary hypophosphatemic rickets, vitamin-D resistant rickets, or genetic rickets. XLH differs from other types of rickets because it cannot be treated by increasing vitamin D alone.

The signs and symptoms of XLH can vary widely and can range from low phosphorus levels alone to more severe symptoms including bone abnormalities. Symptoms tend to appear in children within the first 2 years of age when they begin to bear weight on their lower limbs. Symptoms tend to become worse over time if untreated and may include:

Diagnosis is based on a physical exam including signs and symptoms, blood tests, imaging tests such as X-rays to determine the extent of bone and joint disease, and family history. Blood tests can be done to measure levels of phosphorus and FGF23 in the blood. Low phosphorus and increased FGF23 levels are present in patients with XLH. Diagnosis can also be supported by a lack of response to phosphate and vitamin D treatment. In addition, genetic testing is available and can confirm the diagnosis if an associated mutation is identified; however, it is not necessary for diagnosis.

The goal of treatment is to improve pain and to correct bone deformities. Current treatment options for XLH include a type of medication called a fibroblast growth factor 23 (FGF23) blocking antibody which can be used to decrease phosphate wasting to increase phosphate and vitamin D levels in the body. Other treatments include phosphorus supplements in combination with calcitriol (active vitamin D).